A second split decision defeat dropped Luis Pena’s (7-2-0) UFC record to 3-2. He put together a solid effort against Matt Frevola, landing more volume and the more impactful offense, but gave up 4 takedowns.

Pena is a creative fighter that offers a lot of different techniques both standing and on the mat. His above-average length makes him difficult to deal with in all areas, including a strong mat game from both top and bottom position.

That being said, he has been taken down at least once in each of his UFC fights and has given up multiple takedowns in 3 of his 5 fights.

Steve Garcia (11-3-0) is making his debut on 5-days notice, with roughly a week to prepare. He has some quality experience, taking 7 fights under the Bellator banner and a 2019 Summer win on the Contender Series. He earned 4-straight wins with Bellator before a 1-2 stretch capped by a loss to Joe Warren ended his time with the company.

Garcia has finished 8 of his 11 wins by knockout. He showcased good finishing skills on the Contender Series, hurting his foe and following with a barrage that eventually overwhelmed his foe.

At 6’0″ tall, he will give up 3 inches of height to Pena, but their reach is equal at 75″. Garcia missed weight for his Contender Series bout and has bounced around between Bantamweight Featherweight.

The lack of prep time for Garcia is a major concern. Potentially equally as concerning, he will be the smaller/shorter man which is something he is not used to. Pena needs to be mindful of Garcia’s power, but he should have a decent edge in the grappling and range striking. Look for Pena to take this fight to the floor and land heavy top position offense- my prediction is Luis Pena to defeat Steve Garcia by TKO.

Silva’s loss to Borg was a back and forth battle, contested primarily on the mat. Silva won the majority of the positions in round 1 while Borg found more success in rounds 2 and 3. Similar to his brother, Silva has been known to slow in more demanding fights.

Back in 2017, Kyler Phillips (6-1-0) scored a 46 second knockout on the Contender’s Series, but it wasn’t enough to get the immediate call to the Octagon. He also participated on the Ultimate Figther. After suffering the first loss of his career, a 2018 split decision defeat he returned to LFA to pick up his 4th pro win by knockout.

After fighting 5-times over his first 2 years as a pro, Phillips has struggled to remain active. He competed once in each of 2017 and 2018.

Phillips’s most recent win came via nasty head kick, wrapping his leg around the back of his opponent’s head and dropping him to the floor.

Silva held his own against Borg who has routinely proven to be a handful at both 135 and 125 pounds. He got the better of the grappling exchanges early, but slowed down which could be a concern here against Phillips. This stands to be a close fight early, with both figthers trading on the feet. As the fight advances and Silva slows, look for Phillips to find more success allowing him to take control and potentially set up a finish- my prediciton is Kyler Phillips to defeat Gabriel Silva by TKO.

Brendan Allen (13-3-0) made the most of his debut with a middle-round submission win over Kevin Holland. He has won 5 in a row including a trio of submission victories- he has 8 tap outs as a pro.

Allen’s offense is built around closing the gap, clinching, and eventually dragging his foe to the mat. Against Holland, once on the mat, he was aggressive in pursuit of a dominant position. This both led to some strong positions, but also out Brendan in a few bad spots on his back.

Former Welterweight Tom Breese (11-1-0), is closing in on 2-years out of action after making his 185-pound debut. His Middleweight start began against the overachieving Aussie Dan Kelly- the Brit ended the bout via knockout inside round 1.

Breese landed a well-timed uppercut to send his opponent to the floor before finishing him with ground strikes.

Despite relying primarily on his striking in the UFC, Breese actually has more submission than knockout wins. He has yet to complete a takedown in the UFC and has stopped over 70% of his opponent’s TDAs.

This is a close fight with both fighters holding specific advantages. Allen is a slightly longer fighter and carries a more active pace. He has also been more active, fighting 5-times since Tom last competed. Breese is the better striker, hits harder, and puts up a better defensive front. If the Brit fades under the pressure of Allen, the American could finish him or take a wide decision. Conversely, Allen’s willingness to put himself in bad spots when engaging will cost him. Breese will hold superior position on the mat and win the majority of the exchange on the feet- my prediction is Tom Breese to defeat Brendan Allen by decision.

With wins in 3 of his first 4 UFC outings and a strong main event performance against Fabricio Werdum, Marcin Tybura (17-6-0) appeared poised to make a run into contention. Unfortunately, losses in 4 of his last 5 fights have put the Polish fighter’s UFC career in jeopardy.

Marcin fell via late TKO against Derrick Lewis, in a fight he was potentially winning. He has been stopped via strikes in each of his last 2 fights, pushing his career total to 4 knockout defeats and raising concerns about his durability.

At his best, Tybura throws respectable striking volume, with a decent kicking attack and will mix in some clinch and takedown control.

Moldova’s Sergey Spivac’s (10-1-0) debut lasted less than a minute, but he rallied from the first loss of his career to score an upset of Tai Tuivasa to level his UFC recorded at 1-1.

“The Polar Bear” has stopped all 10 of his pro wins inside the distance- 8 before the end of round 1. The majority of his success against Tai Tuivasa came on the mat, landing takedowns and eventually working towards a submission.

Spivac is 10 years younger than his foe and roughly 10 to 12 pounds heavier.

Tybura’s lack of durability is a major concern against the aggressive forward push of his opponent. Spivac is younger and heavier than Tybura which further adds to the concern of how Tybura will hold up in a firefight. Marcin has struggled to mount much offense or defense in recent action while Sergey is coming off a strong performance. Look for the Moldovan to overwhelm is foe early- my prediction is Sergey Spivak to defeat Marcin Tybura by TKO.

Back to back decision defeats to UFC veterans Dan Ige and Chas Skelly has the “Native Psycho” in desperate need of a win. Jordan Griffin (17-7-0) came into the UFC on the strength of 4 consecutive submission wins with his last 8 wins coming inside the distance.

While Griffin has proven himself as a dangerous grappler on the regional scene, he has struggled on the mat at the UFC-level. Both of his opponents have utilized grappling heavy assaults in their victories over Griffin.

A 20-fight veteran, TJ Brown (14-6-0) has competed under the LFA and RFA banners, and with a Contender Series win to capstone a 4-fight winning streak.

With 9 of his 14 wins by submission, he has showcased a strong finish game on the mat with 6 wins by arm-triangle and a trio of RNCs.

In his last fight, Brown survived an early knockdown and landed an illegal knee late in round 1. For the majority of the contest, he dominated with a strong takedown attack and active transition game before securing the submission finish.

Brown has been finished on 5 occasions, 3 by knockout. This certainly raises some concerns regarding his durability. Conversely, his ability to engage his foe on the mat and work out of bad spots doesn’t bode well for Griffin’s struggles on the mat. This contest stands to be very entertaining, but ultimately Brown will hold the positional edge on the mat leading to a finish- my prediction is TK Brown to defeat Jordan Griffin by submission.

Contender’s Series graduate Aalon Cruz (8-2-0) was set to make his debut in the Octagon against Steven Peterson, but instead of the 5-fight UFC veteran, the Florida-native draws another debuting opponent.

While his Contender’s victory was punctuated with a beautiful flying knee knockout, Cruz utilized a kick heavy offense throughout the contest. He worked in snapping low kicks, but also targeted the body and head with round and straight kicks.

He has finished 4 opponents, is undefeated on the scorecards at 4-0, and both defeats have come via submission.

Spike is aggressive and he will need to use that aggression to overcome a massive length disadvantage. Cruz is 4-inches taller and will have a 7″ longer reach. He maintains a persistent wrestling centric attack, latching onto a single leg and working various techniques until they hit the floor.

In his LFA appearance, he scored a beautiful spinning back fist KO.

If Cruz can maintain his preferred distance against “The Alpha Ginger”, he will pick him apart with kicks. Conversely, the forward pressure of Carlyle could nullify his opponent’s desired striking technique once he closes that gap. Cruz’s volume is an area of concern, especially if he can’t keep his aggressive opponent at bay. The 2 submission losses suggests that Aalon is vulnerable on the mat. Cruz will outwork his opponent for the duration of the fight, pushing a strong pace with multiple takedowns- my prediction is Spike Carlyle to defeat Aalon Cruz by decision.

After an upset of Michel Prazeres in his short-notice debut, Ismail Naurdiev (19-3-0) has compiled a 1-1 record- most recently besting the heavy-handed Siyar Bahadurzada.

“The Austrian Wonderboy” authored a strong performance against Siyar, coupling a pressure-based striking attack and timely takedowns to control the majority of the fight. Conversely, in his only UFC defeat, his foe forced Ismail into grappling exchanges that routinely forced him to his back.

In a similarly strong debut, Sean Brady (11-0-0) defeated long-time veteran and TUF winner Court McGee. Brady scored a knockdown early in the fight which set the stage for a decision win.

The decision-heavy record of Brady, 6 of 11 win on the scorecards, has been a point of criticism for Brady.

The former CFFC Welterweight champion showcased his speed against McGee and put forth an impressive volume (119 significant strikes).

Both fighters have a diversified skillset that allows them to compete anywhere the fight goes. The key differences will be speed and activity rate. In both wins, Naurdiev benefited from opponents that slowed down and were far less active then he was. Brady pushes a more aggressive pace and has showcased the ability to wrestle when needed. If Naurdiev is unable to land something significant to change the complexion of the fight, Brady outworks- my prediction is Sean Brady to defeat Ismail Naurdiev by decision. 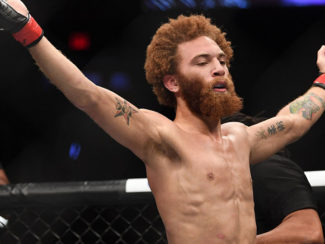