In the final fight of the undercard, TUF alumni and Australian event staple Jake “The Celtic Kid” Matthews battles Sweden’s Rostem Akman in the Welterweight division. Matthews is coming off a submission loss to Rocco Martin- he had won 3 in a row. Akman lost his debut, the first loss of his pro career, via decision to Russia’s Sergey Khandozhko.

Matthews is an inch taller and will have a 1″ reach advantage. He is 3-years younger than the Swede.

Rostem took his debut on short notice and while he held his own, he simply didn’t do enough. He ha finished all of his wins inside the distance- 5 by knockout. Akman suffered a knockdown that appears to change the course of the fight and he began to slow down after the first frame. He attempted 5 takedowns and completed 2.

Matthews was a fighter that has developed physically and as a result, he has had to move up to 170-pounds. He held his own until he ran into a fellow former Lightweight in Martin. “The Celtic Kid” has improved his striking, but he does his best work on the mat. He has completed 13-takedowns over 7 Octagon wins compared to just 4 in his 4 UFC losses.

Unless Rostem can find an answer for the combination of Matthews’ physicality and wrestling, he will struggle to score enough offensive points to overcome the Aussie. Matthews’ striking has improved with each outing and should do so again here. Akman is capable enough to exploit an off performance from Jake, but he will be on point at home- my prediction is Jake Matthews to defeat Rostem Akman by decision.

Promotional sophomore Callan “The Rockstar” Potter takes on promotional debutant and Contenders Series graduate Maki Pitolo in the Welterweight division. Potter made a short notice debut against Jalin Turner and lost via 53-second knockout- he is a 1-2 after an 8 fight winning streak. Pitolo had a great first impression on the Contenders Series winning via first-round TKO, he was also successful in his recent Bellator debut.

They share the same 72″ reach, but Potter is the taller man by 2-inches. Callan has fought at both Lightweight and Welterweight and is 6-years older than his foe.

Potter has only seen the scorecards once in his career, recording 6 wins by knockout and 10 bys submission. He has asl been finished 8-times- split evenly between knockouts and submissions. Against Turner, he shot for a takedown early and started chaining submissions together once they hit the mat.

Pitolo’s hands looked excellent during his Contenders bout. He maintained solid pressure, throwing in combinations while targetting both the head and body. He eventually put his foe down with a sequence of body strikes along the wall. He took the fight at Middleweight.

Potter’s history of stoppage defeats and an overall lack of defensive striking are hard to overlook here. Despite coming in as the shorter fighter, Maki is the larger man and he should have a sizeable advantage in power. His striking game will exploit the gaps in Potter’s game and his experience in longer fights will allow him to maintain his attack as long as he needs to. Pitolo will batter Potter along the wall until the Aussie hits the canvas- my prediction is Maki Pitolo to defeat Callan Potter by knockout.

As Aussie Megan Anderson continues to hold on in the quickly disappearing Women’s Featherweight division, she welcomes the debuting Zarah Fairn dos Santos to the UFC. Anderson is coming off of a submission loss to Felicia Spencer– dropping her UFC record to 1-2. dos Santos makes her debut on the strength of a 3-fight winning streak- besting 1 and done UFC alumni Izabela Badurek by TKO.

At a towering 6’0″, Anderson is just 2-inches taller than dos Santos. She is the younger fighter by 4-years.

Some immediate red flags are attached to the debuting dos Santos. She hasn’t fought in almost 2-years and her last 3 opponents are a combined 20-17 with none of them listed as legit Featherweights.

Anderson is a talented fighter and offers a strong physical presence, but she has struggled tremendously with her grappling defense. Holly Holm took her down on multiple occasions and Spencer made quick work of her on the floor.

Both fighters will be inclined to stay vertical and trade on the feet- this is the long-overdue stylistic matchup that Anderson has been looking for. Zarah is linear in her attack and offers a relatively simplistic striking attack. Anderson is the more diverse striker and she should have the speed and power advantages as well. Fighting at home, the former Invicta champion will enjoy a return to form- my prediction is Megan Anderson to defeat Zarah Fairn dos Santos by TKO.

In the Lightweight division, a battle of Australia and New Zealand will play out as Aussie Jamie Mullarkey meets Kiwi Brad Riddell. Mullarkey has lost back to back fights by knockout after starting his pro career 8-0- his first pro loss came to future title contender Alexander Volkanovski. Riddell has won 3 in a row since the first and only loss of his career- he is 3-0 in 2019.

Both men are 5’8″. Mullarkey is the younger man by 3-years. Mullarkey has not fought in over 3-years.

Riddell trains alongside Israel Adesanya and has compiled an impressive record as a pro kickboxer. Not surprisingly, 4 of his 5 wins have come by knockout- 3 in the first frame. Additionally, his only career loss came by sub which isn’t out of character for a striking based fighter.

Mullarkey has spread his finishes more evenly between submissions (3) and knockouts (4). He is finished 5 opponents in the opening frame. All 3 of his submission wins have come by RNC and he may look to implement a ground-based attack against Riddell to avoid his striking. Mullarkey has competed as low as 145-lbs which suggests he will be the smaller man.

If Mullarkey can bring this fight to the floor he could certainly attack a potential weakness of his opponent. For Riddell, he will be the larger man which will aid him in defending the early TDAs. It is also difficult to overlook the prolonged layoff for Mullarkey and the back to back knockout losses with his 2nd coming to a 7-9 fighter. Riddell is in a much better spot here, if he can defend the early TDAs- my prediction is Brad Riddell to defeat Jamie Mullarkey by knockout.

In the first of 2 women’s fights on the card, Nadia Kassem welcomes South Korea’s Ji Yeon Kim to her homeland for a Flyweight bout. Kassem is coming off her first career defeat, a submission loss to Montana De La Rosa. Kim’s UFC ledge fell to an even 2-2 after a decision loss to Antonina Shevchenko.

Kim is the taller fighter by 2-inches to go along with a 6″ reach advantage. Kassem is the younger fighter by 6-years.

Kassem came into the UFC with a record built on beating low-level opponents very early in the first round. Since coming to the UFC, her defense wrestling has been a major concern. She gave up multiple takedowns in her debut and was submitted in her next performance.

Despite incorporating a ground attack on the regional scene, Kim has attempted just 1 takedown over 4-fights. In the UFC, she has relied heavily on her boxing, throwing with decent volume. It is worth noting that her 2 UFC victories have both come via split decision. She does a decent job of pushing the pace late in rounds to help her edge out close rounds.

Kassem’s record is far from strong and Kim’s scrappy nature will test an opponent that has had minimal success beyond the opening round. Nadia’s struggles on floor could induce Ji Yeon to incorporate a few takedowns. Look for Kim to keep this fight at boxing range against a kick-heavy opponent, picking up the pace as the fight progresses and potentially securing a couple of key takedowns- my prediction is Ji Yeon Kim to defeat Nadia Kassem by decision.

In the first fight of the night, Khalid “The Warrior” Taha takes on the debuting Brazilian Bruno “Bulldog” Silva in the Bantamweight division. Taha smashed his way through Boston Salmon in just 25-seconds to rebound from an unsuccessful debut. Silva has won back to back fights dating back to a Split Draw with current UFC roster member Casey Kenney.

At 5’5″, Taha is an inch taller than Silva and 2-years younger. Silva, who is listed as a natural Flyweight, has not seen action in almost a year.

Taha landed a crushing left hand that abruptly ended his fight with Salmon. He has finished 11 of his 13 wins- 9 by knockout. Over his last 4 fights he has lost both times he has been forced beyond the first round. In his debut, he spent the majority of the fight on his back which both nullified his striking threat and extended the fight into deep waters.

Silva has split his 6 finishes evenly between knockouts and subs including a trio of 3rd round stoppages. He is 4-1 in decisions. The Brazilian throws a variety of offense and owns an impressive wheel kick knockout. He will take the fight to the floor if presented with the opportunity. Silva competed on 4th season of TUF Brazil and his last 3 opponents carry a combined 32-29 record.

The size factor favours Taha as the more natural Bantamweight. If Silva can find some success with his ground attack he could extend Khalid into the second half of the fight and slow him down. In order to do that, he will need to evade the power striking of the German “Bulldozer”- not easy. Taha will work inside Silva’s kicks and blast him with big strikes- my prediction is Khalid Taha to defeat Bruno Silva by TKO. 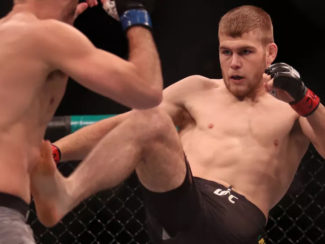